B. Regulations for the draw to the button:

The results of the draw to the button will be used to rank the teams who make it to the playoffs of class A, C and D.

All the data collected during the draw to the button shall be submitted to the organizers of the two clubs to create a ranking based on the results. This ranking will be displayed in both clubs for the duration of the tournament.

The team with the best performance will get 6.0 PTB points while the twentieth team will get 0.3 PTB points, therefore there will be an upgrade of 0.3 points per rank. These points will be added to the team card at the end of the tournament to enhance the process and they will break the ties in the general standings. 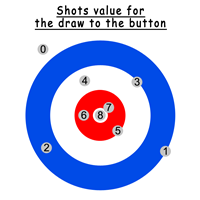 1. Points awarded at a tournament

Here are the rules applied in the points system this year:

2. General ranking for the DMMC league

3. Participation in the tournament of Champions

1. Purses granted at each tournament

2. Purses granted for the tournament of Champions